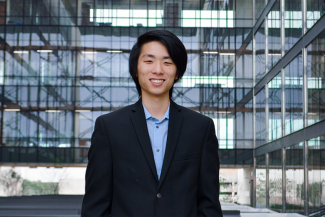 Texas ECE and chemistry double major and Dean's Scholar Teddy Hsieh joins an exclusive club of 56 undergraduates from across the country to receive the 2020 Astronaut Scholarship. It comes with up to a $15,000 prize and guidance from an assigned C-suite executive, industry expert or real-life astronaut. Hsieh, a rising junior, continues a streak of Dean's Scholars to win the scholarship — Sofia Helpert won last year.

Hsieh won in part for his work at LASE, a University of Texas at Austin lab attempting to take computer-component fabrication into the third dimension, or as Hsieh says: "build skyscrapers instead of one-story villages."

What's your favorite part of doing research at UT Austin?

The most exciting part is you can make something that's … a thousandth the width of a hair and make it sing. That really is magic. If you think about it, engineering is magic that we understand. And I think there's something elegant in that.

Teddy Hsieh holding a quarter-circle silicon test wafer. Each square contains a different type of pattern the lab is testing for use in nanodevices. Photo credit: Teddy Hsieh.

How do you think the Astronaut Scholarship will impact your career?

I believe in 10 or 15 years I'll look back and see it as one of the more important benchmarks. The only other thing similar to it is joining Dean's Scholars, because the Astronaut and Dean's Scholars both exposed me to a network of like-minded peers and mentors. I think that the unique advantage these programs offer is the mentorship – it shows you opportunities you never realized you could pursue.

Is this scholarship a step towards something bigger?

Definitely something along those lines. There's this concept that I've bought into of 'snowballing' your career and your life. It's about one step at a time – that each step leads to the next. And a lot of times when you have a mentor, they tell you which way you need to go in order to continue to snowball instead of perhaps, spending your time sub-optimally.

Where do you want this snowballing process to take you?

I'm deciding between going into industry or to grad school, or some combination of the two. A lot of what I'm thinking right now is, should I go to grad school? Is it worth the opportunity cost? And if I do decide, how would I optimize my time spent there? That's definitely something I hope I can figure out with the help of the Astronaut Scholarship and Dean's Scholars.

I'm sure you've heard the 'everyone here is a valedictorian,' attitude at UT Austin, where a lot of people have this idea, like imposter syndrome, that everyone else belongs more. As one of those high achievers yourself, what do you think about this mindset?

I don't believe the shame should be so overpowering. Instead it's accepting that you have your limitations. That's why you're at an institution for learning. Why are you here if you can't first identify that "I have flaws and let's try to fix them." I think that's the right mindset. The growth mindset. If you believe in that mindset, then college is as you make it.

You mentioned you're a first-generation immigrant. Do you think that influenced your acceptance of a growth mindset?

I'd say it has influenced me subconsciously. My cultural background is: there's a sky above the sky. The limits are not real limits, that you should always seek to improve. And I think in America, we tend to see that as a discouraging thing – like, oh man, I'm never good enough. But I think my culture sees it as, this is what you could be. You can be taller than even the sky, as long as you work hard enough.